News: This week, the McCain camp has launched a series of ads against Barack Obama. Compared to McCain’s earlier videos, these videos appear to be doing very well on YouTube, getting thousands of views. I hope to get another full report on the candidates’ videos on YouTube in the near future.

Obama Love ad mocking the media for coverage of Obama

And submit a video answering the question:

The 5 most creative and compelling videos will be selected by each Convention committee, and YouTube users will vote for the winner.

The deadline for submission is AUGUST 1 – so submit your video today!

News:  I’ve just published my Fifth Report analyzing the videos of the presidential candidates on YouTube.  Barack Obama continues to beat John McCain in popularity on YouTube by wide margins.

You can view and download the report by clicking here.

Go to my report.

Video over at The Utube Blog 2.0, www.theutubeblog.net.  Hilarious skit, one of the funniest in recent memory.

New Obama will.i.am video: “We are the ones”

Bill Clinton stands up to heckler in Ohio

will.i.am, “Yes we can” song for Barack Obama

News: Caroline Kennedy, daughter of JFK, and Senator Ted Kennedy have officially endorsed Barack Obama. Caroline’s endorsement of Obama yesterday in the NYT op-ed was very moving: She described Obama as the only person she has witnessed in her lifetime who could be a “President Like My Father.” That’s a remarkable statement from a remarkable woman.

Ted Kennedy still knows how to deliver a speech!

Is President Bill Clinton completely out of control?

It seems beneath the dignity of a former President of the United States to be the attack dog in a political campaign.  I don’t remember President George H.W. Bush playing that role for his son.

Clinton and Obama throw off the gloves in South Carolina

News:  Senators Clinton and Obama took major shots at each other during the CNN South Carolina debate.  Things got ugly.

News: You can download from the link above my latest report on the use of videos on YouTube by the presidential candidates. The study was completed before the New Hampshire primary.

Analysis: Here are my 3 key findings:

(1) Republican candidate Ron Paul continues to be, by a wide margin, the most popular candidate on YouTube, in terms of the average number of views per video (105,908 views per video) and the number of subscribers to his YouTube channel (42,858). He also has the most total views (9,320,763) on YouTube for any presidential candidate (although he does not have the most viewed single video on YouTube—Mike Huckabee does).

(2) Republican candidate Mike Huckabee has experienced a dramatic growth in the popularity of his videos during November and December 2007. He jumped from close to the worst in average number of views in October 2007 to the second most views per video by January 4, 2008, with 27,818 views per video. Most impressive of all is the fact that Huckabee is the first candidate with a video that has generated over 1 million views on YouTube.

(3) Finally, as the primary season has begun, the candidates’ YouTube videos have seen a huge increase in the number of views than in previous months.

Saturday’s YouTube videos from the candidates in New Hampshire

News: I hope to have another official report on the popularity of YouTube videos of the presidential candidates soon. There’s been a lot of movement, especially by Mike Huckabee. You can view my past reports here. In the meantime, I will be posting the campaign videos of the key contenders each day until the New Hampshire primary. Here are Saturday’s videos:

“This defining moment in history.” Nearly twice as many voters showed up this year than in 2004. 56% were first time caucus-goers.  If you want to watch the version shown on TV with distracting subtitles, it’s below:

News:  The Des Moines Register and YouTube will be soliciting videos from people on the Iowa caucuses as things unfold.  You can submit your video starting today.

News:  YouTube and TV stations from Manchester and from Boston have announced a partnership for the New Hampshire primary.  People will be allowed to upload videos to the YouTube sites of the 2 TV stations for instant commentary on the primary.

Is there a subliminal cross in Huckabee’s Christmas video on YouTube?

News:   Mke Hucakabee just posted his latest YouTube video.  It’s a Christmas message.  Some cable news channel indicated that there’s a subliminal cross in the background next to the tree.  You be the judge.

I used to be a political junkie in high school and a little in college. Not anymore these days. But I do think I have a modest skill in analyzing the political landscape. Several years ago, I told a friend of mine that Rudy Giuliani will be the front runner to get the Republican nomination. He said there’s no way the conservatives would back him, the guy had too much baggage and liberal leaning social policies. I said, 9/11.

Then, just several months ago, I suggested to another friend that Mike Huckabee has a chance on the Republican side. That was when the political pundits said that he had none. Well, today, Huckabee is leading the polls in Iowa. You heard that right, Huckabee is now on top in Iowa. And he’s surging in the polls nationally. Apparently, getting the endorsement of Chuck Norris helped.

Huckabee’s also surging on YouTube. His first video with Chuck Norris (see below) is, by my account, the only video on YouTube from one of the candidates, Republican or Democrat, that has received over 1 million views.

By the way, none of this post should be taken as my endorsement of any candidate.

Are Republican presidential candidates more popular than Democrats on YouTube?

News: The CNN-YouTube debate for the presidential candidates this past week was surprisingly good — much better in my book than the first Democratic debate. From the first question in which Rudy Giuliani and Mitt Romney questioned each other’s toughness on illegal immigrants, the debate exposed very sharp differences between the Republican candidates. 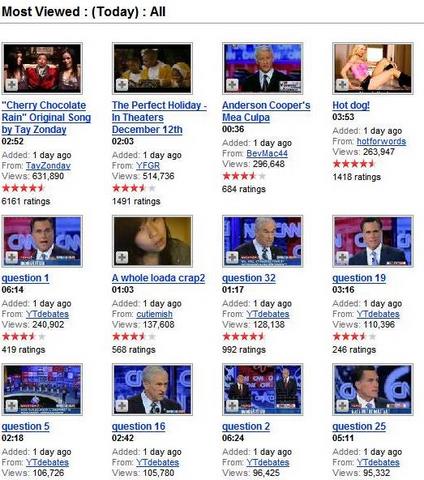 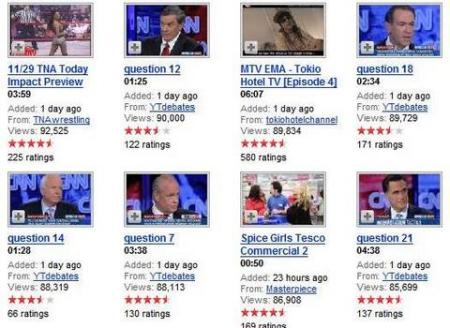 Analysis: Bravo to CNN and Anderson Cooper. I criticized you soundly for botching the Democratic debate with gimmicks and favoritism. Much better this time around.  Some excellent questions and revelatory moments.  The number of views on YouTube confirm how good the debate was.

The Dick Cheney question was asked during YouTube debate

Hey, I predicted one of the questions that would be used last night from among the thousands submitted. Here’s the Dick Cheney question.  Fred Thompson’s one-liner was hilarious!

They should show a video of water boarding.

The Utube Blog
Create a free website or blog at WordPress.com.