News:  Prince has hired the service Web Sheriff to patrol YouTube for unauthorized videos of his music and concerts.  So far, reportedly the Web Sheriff has asked YouTube to remove 1,000 unauthorized clips.  John Giacobbi, managing director of Web Sheriff, says, “At the end of the day, if you take copyrighted music and film off YouTube, most of its business would be gone.”  (More)

Analysis:  I hate to say it (because I used to be a big fan of Prince) but Prince is washed up.  The worst concert I went to last year was Prince in a hotel bar in Las Vegas.  The performer was two hours late (apparently, that’s his MO) and then performed songs that were unrecognizable to most.  You had to pay extra for seats, so most people had to stand or sit on the floor for two hours or more.  I would have had no problem if the show times were accurately reflected on the tickets, but the promoters of the show obviously must have known that it would lose a lot of customers if the tickets said “Prince, 12:30 a.m. to 3 a.m.”

News:  According to the NYT, Comscore has some interesting stats on video viewing online.

1.  75% of Internet in the US now watch an average of 3 hours of video online per month

3.  2.5 billion videos were viewed on Google sites in July, of which 2.4 billion came from YouTube

News: I just noticed an ad from Barack Obama’s campaign on YouTube. It’s the first I’ve seen from a presidential candidate. 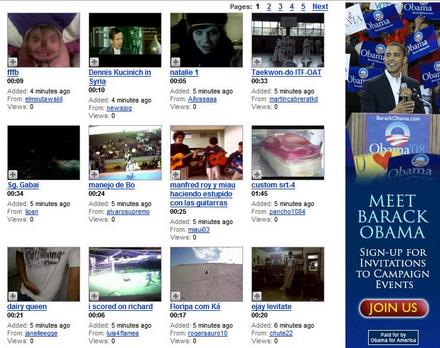 News:  Henry Blodget at Silicon Alley Insider has some insightful analysis of William Morrison’s analysis of Comscore’s recent data on Google and YouTube.  (Sorry for the double hearsay.)   Here’s the good and the bad for YouTube:

The good:  YouTube accounts for 28% of the total minutes spent on Google sites.

According to Blodget, “The bigger YouTube gets as a percentage of users and minutes, the more Google’s profit per user/minute is likely to drop.”

Analysis: All of these numbers can shift if YouTube’s InVideo ads actually attract advertisers.  Google is banking on this new system to generate revenues for YouTube.  Of course, the copyright lawsuits against YouTube could throw a major monkey wrench into these plans, particularly if YouTube suffers a major defeat in one of the bigger cases.

News:  Google VP David Eun was in Korea for the  Dicon 2007 conference.  He announced that YouTube is negotiating with content providers to feature news videos on YouTube, which will be synched with relevant InVideo ads as a part of revenue-sharing deals.  (More)

Analysis: This makes sense on both sides.  News organizations are hurting for revenue, given the Internet’s popularity and ability to make news free.  YouTube needs “safe” videos (not copyright infringing) that will appeal to advertisers whom YouTube wants to attract to its site.  It will be interesting to see, though, if people watch news on YouTube, especially if it comes from mainstream media.

News: I reported here a couple weeks ago about the questionable DMCA notice that Viacom (MTV) sent YouTube to take down the short video below posted by Chris Knight. MTV had taken footage from Knight’s YouTube video and played it on the MTV show, “Web 2.0 junk.” Knight found out about his video making it on MTV, so he posted the short clip of his video as shown on MTV. The only problem — MTV complained to YouTube that it was copyright infringement — even though Knight’s own video really was what the content was all about.

Well, now finally sanity has been restored. Viacom has backed down and admitted (at least internally) its own mistake. Chris Knight reports on his blog that YouTube has restored his video, after intervention from EFF’s Fred Von Lohmann. Knight is also quick to write that he has no hard feelings with Viacom and asks that his readers not have any, either.

Analysis: My guess is that maybe MTV didn’t even know Chris Knight was the one posting on YouTube the clip from MTV showing Knight’s own video. It’s good that MTV/Viacom came to their senses and realized that they would be on the losing end if this ever went to court, especially after EFF got involved.

The Utube Blog
Blog at WordPress.com.