News:  iJustine is featured in today’s NYT for her video spoofing AT&T’s 300 page bill for iPhone service.  Her video, along with other complaints, caused AT&T to come to its senses and stop sending subscribers bills over several hundred pages.

Analysis: Who in their right mind at AT&T ever thought that a 300 page monthly bill would fly?

VideoEgg clarifies its position on internal ads on YouTube

News: Michael Arrington of the Tech Crunch blog has a great post on the market reaction to VideoEgg’s suggestion that YouTube has ripped off VideoEgg’s internal ad technology (for which VE has sought patents). Apparently, a VideoEgg exec has stated (maybe that’s too strong a word?) on the Tech Crunch blog that VE has no plans of stopping others from using internal ad technology with its patents if they are granted.

Analysis: If that’s the case, then YouTube has nothing to worry about in deploying its new internal overlay ad system (unless VE later changes its mind).  I now stand by my original take:  this new ad system is how YouTube will make billions.

News:  YouTube’s own blog has a post asking people for feedback on the new internal pop-up ads within select partner videos on YouTube (discussion in the prior post below).  A number of the comments seem quite negative, as reported here.  Here’s one YouTuber’s video critique.

Analysis:  Personally, I like the internal ads, especially because, as I understand it, they will be deployed only on partner videos (and not the majority of videos on YouTube).  I don’t find the ads intrusive, and YouTube’s got to find a way to make money.  People can’t expect YouTube to offer everything for free to people, even free of any ads within videos.  The internal ads are much better than pre-roll ads that are so common on commercial sites.  If you watch television, you often see things scrolling on the bottom of the screen (like a news ticker) or watermarks at the corner of the screen.  I usually just ignore those things.

News: As Tech Crunch reported, VideoEgg is blasting YouTube for the new internal overlay ads being deployed on YouTube in the past few months. VideoEgg claims to have developed the technology last year, and even applied for patents on it. Wired has an interview of a VideoEgg exec. 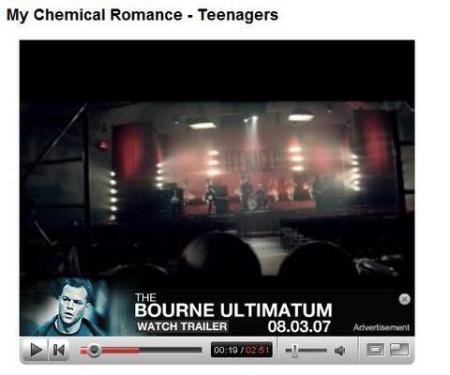 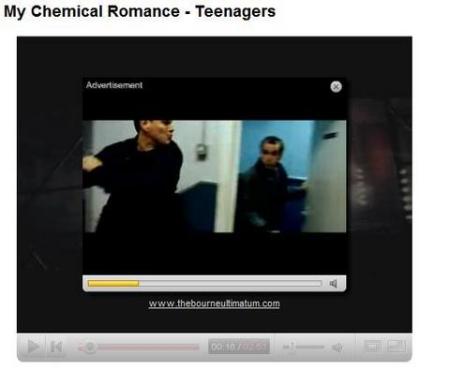 Analysis: OK, the technology of having an internal ad within a video from YouTube looks very similar to the one from VideoEgg (at least currently on its site). Just compare the photos above — they both even have the Bourne Ultimatum ad. I did notice some difference between the ads, though; VideoEgg’s seemed to automatically play by itself at the end, while YouTube’s doesn’t.

Even though the technology is similar, YouTube really has no worry unless that Video Egg successfully obtains patents from the Patent Office for the technology or method used. That’s when you could expect another lawsuit against YouTube. It’s anyone’s guess what the Patent Office will do. Could you imagine, though, if someone tried to patent the use of TV commercials? Sounds a little silly. If a patent is granted to VideoEgg, it could change what I said about YouTube making billions from this new ad system.